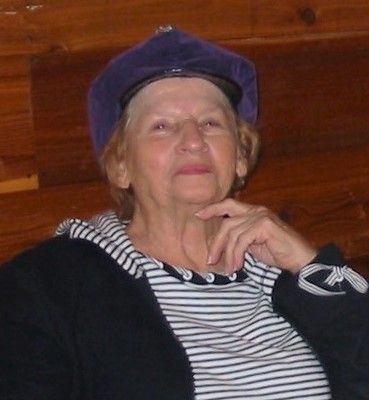 Twyla Jane Schneider was born February 12, 1925 in Salineville, Ohio; the daughter of Leslie and Goldie Metts. She was a lifelong resident of Ohio.  At the tender age of twelve, she secured her first job as a soda jerk at a drugstore in Salem, Ohio.  At the onset of World War II, she became proudly involved as a true “Rosie the Riveter” working at a factory and in her own words “to support our boys overseas”.

Twyla spent her adult life as a homemaker, food service, caregiver, manager and Co-owner of Dan-Mar’s tavern in Canton, Ohio.   She will be long remembered for her homemade decorated cakes, cookies and especially her Hershey cocoa fudge and baklava.  Her family and her local community admired her self-taught knack at crocheting, knitting, sewing, and upholstering.  She was self-motivated and displayed creativity, determination and leadership and she instilled in her family compassion, honesty and hard work.  She loved to entertain and is well known for never sitting down till everyone was served.

Caregivers commented that she always had a smile and a pleasant personality.  For the past ten years, her youngest son, Theodore Murutes was blessed with his role as primary caregiver.

A private family viewing will be held Friday, May 29, 2020 at Paquelet-Falk Funeral Home. Following the viewing, is an open invitation to friends and family at Texas Roadhouse in Alliance, Ohio at 4:30 pm. Condolences and special memories can be shared with the family online at www.heritagecremationsociety.com