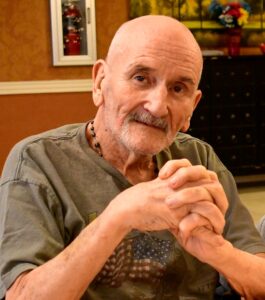 Terry went on to join the National Guard in November of 1977 and served until 1980. He achieved the rank of staff sergeant/ E6. He then joined the Army Reserve where he served from 1980 through 1983.   He attended the 101st Airborne Armor School in August of 1980 followed by jump school in 1981.  He joined the Army Reserve Special Forces in July of 1982. He was part of the 2nd Battalion, 11th Special Forces Group 1st Special Forces. He received an honorable discharge from both. The most distinguished of his service was to become a Green Beret with the Special Forces. It is a great honor to achieve and not a lot of people make it further showing Terry’s aptitude and loyalty to his country.

Following his full-time military service, he worked at Hoover briefly before  he then went to work for Ohio Bell in 1969 where  he worked for 24 years until he retired in July of 1993. He proudly served the Jackson Township Volunteer Fire Department as a firefighter/emergency medical technician from 1970 TO 1978 again furthering his duty to serve his fellow man. Terry was a brave soldier whose struggles on earth are over now, he rests in the arms of the angels.

Thanks, and gratitude to Valli Spahn for making Terry’s transition to the other side easy and peaceful, for holding the sacred space for us to say goodbye. I will never forget what you did for us. Many thanks to the VA for the years of care they gave Terry. Especially the PACT 4 team at the Akron VA consisting of Michelle Carson, Beth Harris and Heatherlin Bartholemew.  His family would like to give special thanks to the wonderful staff at Heather Knoll in Tallmadge for taking such good care of Terry while maintaining a sense of humor for the character he could be at times. For listening patiently to his stories. Special thanks to Beckie, Karee, Mel, and Bill. I am sure we have forgotten the names of some but, we knew your faces. We appreciate your love and support that went above and beyond.  Many thanks to Wellspring Hospice for their guidance and advice. Thank you, Holly DeVore.  And to the Chaplain Danny for visiting with Terry. Grateful thanks to Andrew J. Gonzales, Parochial Vicar at Holy Family Catholic Church for responding to the family’s spiritual needs on short notice, giving Terry anointment, last rites and comfort.

Condolences and special memories of Terry can be shared with his family online at www.heritagecremationsociety.com.