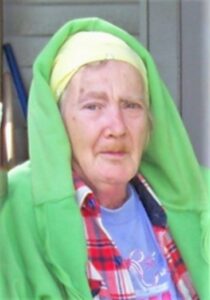 Shirley A. Sharpless, 81, passed away Saturday, August 21st, 2021, after a short battle with lung cancer. She was born in Philipsburg, Pennsylvania on March 3rd, 1940, to the late Harry and Vannetta (Hoy) Smith and was the youngest of seven children. She graduated from Philipsburg High School in 1958, and married John F. Sharpless in 1972, who passed away in 1991.  Shirley worked at a local cigar factory in Philipsburg, Pennsylvania for many years, and left to go into housekeeping at Toftrees Apartments in State College, Pennsylvania, until retirement. She moved to Kent, Ohio shortly after the birth of her grandson. Shirley loved to knit. Many of her projects were donated to local organizations for those in need or to be sold for a fundraiser. She was also an avid collector and reader of romance novels. She loved Elvis, country music, Reuben sandwiches, and gossiping. During her time in Ohio, she could often be seen sitting on her front porch, knitting, and talking to whoever walked by. Shirley was the foundation for her family and through example taught them life’s most important lessons about kindness and helping our fellow man.

The family will be having a small memorial service on Sunday, October 10th, 2021, at 3pm at their Kent residence at 423 Lake Street for all who would like to celebrate Shirley’s life.