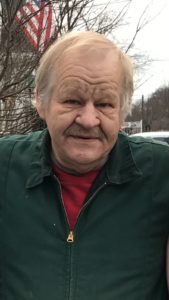 Sebastian H. “Butch” Smith III, born June 11, 1952 to Sebastian and Julia Smith, passed away July 16, 2018. Butch became an animal enthusiast at a very young age.  His knowledge of animals was beyond what you would find in any book.  From the smallest guppy to the largest lion, if you had a problem … call Butch!  He was a former Vet Tech at the NEO College of Medicine and Sigler Animal Clinic.  He worked in many local pet stores and in his final years of life struggled to manage his own pet shop, Tanks-A-Lot of Firestone Park, until he became too weak to continue.  He had been a member of the Greater Akron Aquarium Society, pigeon clubs, and the Ohio Cavy Club.  Butch raised show quality guinea pigs and won many blue ribbons at county fairs.

One of his favorite sayings was “I’m gonna be Rich, Famous, and Well Known.”  Butch was the first to hatch and raise an Emu, he knew a multitude of people, and “Rich”, well he may not have had two nickels to rub together, but the love he had in his Big Heart for his kids made him the richest man ever!

Butch was preceded in death by his parents and brother-in-law, Arthur Dobbins.

Those of us who knew him will miss him deeply … those of you who didn’t, well you missed out! Butch’s family wishes to thank Eileen and Art Berry for helping fulfill his lifelong dream.