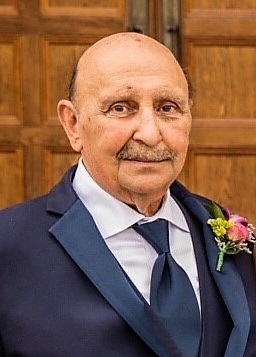 Santo Anthony (Sandy) Consolo 76, of Chagrin Falls, Ohio, passed away on May 22nd after a long illness. He was born on August 13, 1943 to Ralph and Santina (Loparo) Consolo in Cleveland, Ohio. He attended St. Joe’s and Brush High Schools and after graduation, attended Moler Barber College in Cleveland. After a brief stint in the Marines, Sandy became a lifetime member of the IUOE – Local 18 after working for 30 years as an operating engineer for the city of Cleveland.

Sandy most enjoyed his retirement spending time with family and friends; lunch with his Wednesday buddies and dinners with his “Goombah’s”.

Sandy was preceded in death by his parents; brother, James; grandson, Harrison; brother in law, Bill Weaver; and sister in law, Florene.

In lieu of flowers, the family asks donations to be made in Sandy’s honor to Wounded Warriors Project: support.woundedwarriersproject.org.

A celebration of Sandy’s life will be held at a later date.

The Consolo family is eternally grateful to Vinney Hospice of Montefiore, Awesome Companionship Care Agency and all who have helped during this difficult journey with meals, care, love, and support. Condolences and special memories can be shared with the family online at www.heritagecremationsociety.com.