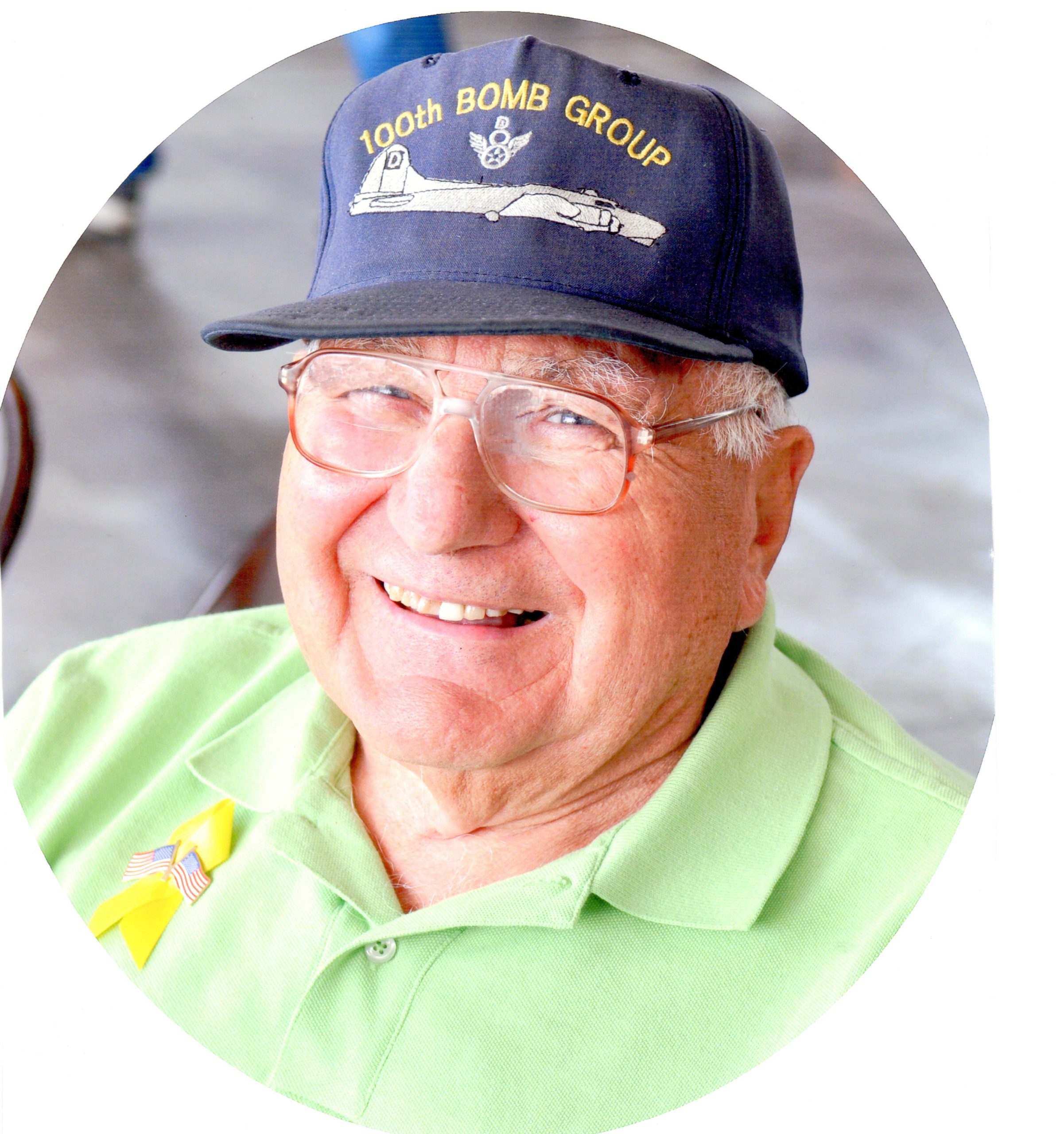 Like many of his generation, he grew up during the Depression and recalled his childhood as difficult but happy. During grade school he was a marble champion, spelling champion, and Repository carrier. At Timken High, he played in the band and studied welding, graduating with the first four-year class from Timken.

In 1943, he was drafted into the Army Air Corps. Halfway through pilot training, he was sent to Dyersburg, TN for training as a B-17 crew member. There he met his pilot and lifelong friend, Bob Ellis, coincidentally from Canton, Ohio. The two friends had a big escapade in what a 1943 Repository article called “The Mystery of the Low-flying Bomber.” On their last training flight, they took a detour to Canton, flew low over the city at two a.m. and “those who heard the bomber, scampered outside” as police sent three cruisers to help, believing it might be in trouble. The crew soon left the U.S. for the 100th Bomb Group stationed in Thorpe Abbotts, England. The men of the 100th, and especially Ellis’ crew, “The Brass Hat,” became friends for life. In addition to bombing missions, Russ flew in two Chowhound Missions and after VE-Day, he flew assignments into Dachau and Russia. Among Russ’s awards were the Distinguished Flying Cross for “heroism…in an aerial flight” and the Air Medal with two bronze oak leaf clusters.

During the war, he and Gladys Young corresponded, and the pair met for the first time on Christmas Eve 1945 in his parents’ living room. Engaged on Valentine’s Day 1947, they married July 25, 1947. Russ began building their home on Perry Drive NW, and they moved there in 1949, then spent 60 years there together, rearing children, doing church work, dancing, traveling, story-telling, and singing.

Russ was a welder and blacksmith for Diebold Inc. for 38 years and a member of The International Brotherhood of Boilermakers and Blacksmiths. He served on the Board of Directors of the Diebold employees credit union. His careful attention to detail at work informed his home projects: remodeling the house for his expanding family, making furniture and toys for children, grandchildren, great-nieces, and great-nephews.

He was on so many committees that The Repository once wrote a story when he finally got off one. Among these were:

At the former St. Paul’s UM church: *Chair of the Board of Trustees for the construction of the main sanctuary, as his father had been; *Sunday School teacher 35 years, *Choir member 20 years, and *Member the Pastor-Parish Committee and others. *Cook with brother Les of table service meals for over 250 people at a time in the church basement for decades and later soup lunches that Aultman nurses remember.

Other activities included: breaking and riding horses from the open range for the owners, his sister Olive and her husband; serving on the Perry Zoning Board; coaching Hot Stove Baseball; and attending many events for his kids.

Most enjoyably, he played Santa Claus. A child once said, “Russ Kendig was who Santa Claus had to pretend to be the rest of the year.”

Preceded in death by his wife Gladys May Kendig and his daughter Daun Kendig, as well as his parents and all 12 siblings, Russ is survived by three of his children and their spouses: Diane Kendig and husband Paul Beauvais, Beth Kendig McBride and husband Jim McBride, and the Hon. Russ Kendig and wife Cheryl Kendig. Russ has three granddaughters who call him “Popeye.” They include Bessana Kendig and Claire Kendig. The eldest, Lauren Takeda, and her husband Edgar Takeda are parents of his great-granddaughter, Makenna. He was godfather to five children, and beloved by his nieces and nephews and many loving friends the world over.

A celebration of life will be held at a later date. In lieu of flowers donations may be made to the following:

• A child, elder, or immigrant in need

Stories and photos can be found and messages to the family posted at the Russ Kendig blog: https://russkendig.blogspot.com/

Condolences maybe be shared with the family online at www.heritagecremationsociety.com.