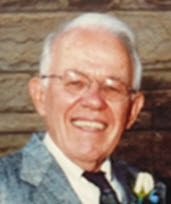 Robert Schuyler Rochford passed in his home October 25, 2018 at the age of 95. Born July 30, 1923 to Emma and John Rochford in New York City, he graduated from Cornell University with a Bachelor of Science degree in Mechanical Engineering and served as a Navy Seabee in the Pacific during WWII. Bob married Ellen (Bloam) in 1946 and was employed by Babcock & Wilcox (B&W) in 1947. They later settled in Manchester (New Franklin).

During Bob’s 37-year career at B&W (1947 – 1984), he worked on designing coal fired boilers and nuclear incinerators and was awarded a U. S. patent for his work on refuse fired vapor generators. He obtained licenses to practice engineering in New York, Pennsylvania, West Virginia, and Ohio.

Bob was a member of St. Francis de Sales Church for 25 years where he was Boy Scout Master of Troupe 215.

Bob is survived by his three children and their families: Patrick (Letitia) of Akron, Thomas (Shereen) of Southport NC, and Kathleen (Stephen) Brenneman of Savannah GA, their eight grandchildren (Melissa, John, Scott, Brad, Caroline, Marcus, and Lindsey) and 19 great grandchildren.

In addition to his parents, Bob is preceded in death by his granddaughter, Dianna.

Private services are planned for the family. Memorial contributions may be made in Bob’s memory to Weill Cornell Medicine Department of Neurology: Medical Research. https://neurology.weill.cornell.edu/ways-to-give. Condolences can be shared with the family online at www.heritagecremationsociety.com.