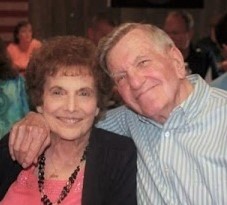 Robert Lewis “Bob” Winsch, age 92, of New Philadelphia, passed away peacefully, after a brief illness, in the Cleveland Clinic Union Hospital on Sunday, February 7, 2021 with family at his side.  Born on April 19, 1928, he was the son of the late Louis Winsch and Ruth (Fivecoat) Winsch.  After graduating from Tuscarawas Warwick High School in 1946, he enlisted in the United States Navy on June 17, 1946 and served aboard the U.S.S. Doyle until he was honorably discharged on June 16, 1948 with a World War II Victory Medal. On November 26, 1950, he married the love of his life, Ruth E. Kyte.  He was a talented carpenter and was involved with many projects over the years and constructed the family home in Tuscarawas. He was a devoted husband, father and grandfather who was very proud of his family. He enjoyed playing cards with friends, watching football and baseball games and in earlier years he and his wife were on a bowling league that won a championship. They received many bowling awards over the years. He was a member of Sharon Moravian Church in Tuscarawas.  He was employed by Warner and Swasey for 24 years and went on to work for Dover Hydraulics retiring in 1991.

In addition to his parents, Bob is preceded in death by his wife, Ruth, who passed away in 2016; and their daughter, Pam Scalambrino.

He will be deeply missed by his children, Cindy (Dan) Llewellyn and Robert II (Pam) Winsch both of New Philadelphia; ten grandchildren and 31 great grandchildren.

In honoring Bob’s wishes, he will be cremated and there will be no calling hours.  A private graveside service will be held at a future date at Sharon Moravian Church.