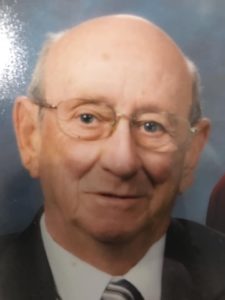 On September 18, 1934, Robert was born in Clarksville, Pennsylvania to the late Louis A. and Theresa A. Hager (Basits). He has lived in Streetsboro for the past 57 years. He served in the US Army from 1957 to 1963 and served two years in Germany as a welder modifying tanks. He worked for Ford Motor Company at the Walton Hills Stamping Plant until his retirement in 1982 after 27 years of service as a lift truck operator and supervisor.

He was preceded in death by his brother Richard “Dick”.

Bob was an avid hunter and fisherman and a Pittsburgh Steelers Fan and Cleveland Browns fan when they were not playing the Steelers.

In keeping with Bob’s wishes cremation has taken place and no public services are planned. Interment with full military honors will be held at a later date at the Ohio Western Reserve National Cemetery in Seville, Ohio. In Lieu of flowers memorials may be made to American Cancer Society at Cancer.org, American Heart Association at Heart.org, or the Hospice of the Western Reserve, PO Box 72101, Cleveland, OH 44192.

Thanks to Hospice of the Western Reserve, Nurse Stephanie Donell, Social Worker Jackie Kelly and the Staff at Hospice Center of Medina County for the care, help and emotional support in our time of need. Condolences can be shared with the family online at https://www.heritagecremationsociety.com/.