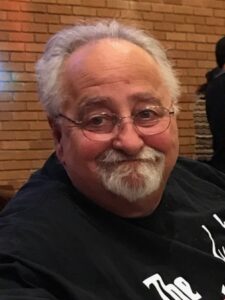 Richard “Rich” Kreal escaped this mortal realm on Saturday May 5, 2018 at the ripe old age of 68.  We think he did it on purpose so his loving wife of 42 years could not retire in September as planned.

He is preceded in death by his parents, Russel and Esther Wilk; his brother Chuck Kreal and sister Linda Kreal.  He was a grandpa to a “shit load” of grandkids, Richie, the late Randy, Cassie, Skyler, the late Joshua, Anthony (Nino), Danielle, David, Derek, Tyler, Riley and Autumn; great-grandpa to Rori & Dimitri.

Rich loved his wife more than life, his best bud Brent “Ba-Bent” and all his other fur babies.  He was a huge Pittsburgh Steelers fan and would ride his Harley everyday if he was able.  He was an avid bird watcher, a fine collector of knives and any electrical gizmo known to man.  He had the ability to make anyone laugh with his silly and unique sense of humor.

Rich was a teamster with Local 407 for 35 years with Seaway/Riser Foods, where he drove his semi and loved his job and his co-workers.

A private service was held

A memorial service is being planned. Please leave a condolence in order to be notified.