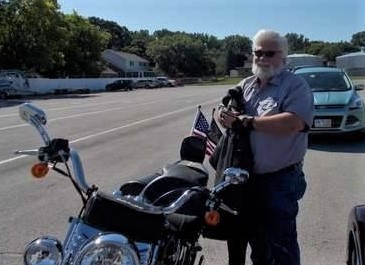 Born in Cleveland, Ohio in 1951 Rick Burns arrived home to a busy household. His parents, Dick, and Helen Burns, managed the tiny office of the Bainbridge Telephone Company which meant they shared their home with switchboard operators, linemen and customers. It seems only natural that Rick would go on to a long career in the telephone industry!

From the treasured 1969 Camaro Z-28 of his youth to the Harleys of his later years, Rick always preferred owning quality transportation. During his two years’ service with the U.S. Army the bright blue Camaro sat parked on blocks. Upon his return the Z-28 got a fresh coat of black paint before it went out to the racetrack as the Black Mariah.

Shortly after leaving the Army Rick joined his father, uncles, and cousin at the Western Reserve Telephone Company (later Windstream Communications) where he remained another forty-three years until his retirement. He would surely have said that the very best part of working for the phone company was meeting his co-worker, the love of his life, Carole Ralston.

In his spare time Rick honed a talent for fine woodworking. He kept close to nature, appreciating outdoor life. He also enjoyed NASCAR races, hot-air ballooning with friends and riding the roads with his fellow H.O.G.s from Southeast Harley-Davidson.

He is survived by his loving partner, Carole Ralston and his sisters, Kathy and Cheryl.

8 Tributes to Richard A. Burns