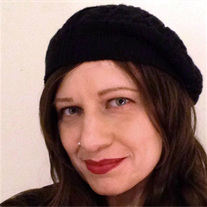 After a lengthy battle with illness, Marifrances Anne Conrad, 45, of Hudson, Ohio, born October 28, 1970 in Defiance, Ohio, passed into eternal life at the Ames Family Hospice in Westlake, Ohio, on January 8, 2016. Her mother, Rose Trunzo Conrad, was by her side.

She had a great love of the theater and during her theatrical career was considered an accomplished actor, writer and director. She played many diverse roles and was accepted into the famed New York City acting work centers of Jerzy Grotowski and Thomas Richards under the direction of
Italy’s Mario Biagini.

An accomplished athlete, she worked out, practiced yoga and became a figure-skater later in life. She was very proud to also serve as a judge for ice-skating competitions.

Mari truly embraced life, accomplished so much and was loved dearly by her family and scores of friends and business colleagues. She was an inspiration to all. In her lifetime, she gave to many charities and to children in need. Her Christian faith was very important to her and she drew on this faith in her final peaceful days.

Her greatest legacy, and her greatest love in life, was her daughter, Olivia Pearl Conrad-McKinnon, whom she provided for and always gave unconditional love and unwavering support in all things.

Mari was preceded in death by her beloved grandparents, Frank and Mary Trunzo of Alliance, Ohio and William and Frances Conrad of Cuyahoga Falls, Ohio.

A private memorial service is pending. In lieu of flowers, donations may be sent to UNICEF for village pumps and wells or to Hudson Montessori School Financial Aid Program, 7545 Darrow Rd, Hudson, OH 44236.