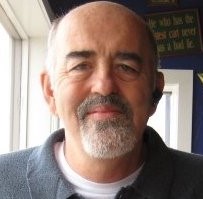 Larry “Doug” Ellis passed away shortly after telling his last inappropriate joke after a long battle with chronic illness on September 27th, 2021 in Barberton, Ohio at the age of 66.

Doug is survived by his beloved wife, Rose; his children, Matt (Deb) of Bangor, ME and Nick (Jessica) of Canal Fulton, OH; his grandchildren Rylan, Olivia, Sam, Nic (Stephanie), Nate, and Grace; his sister, Dolly; his niece and nephews Lori (Chris), Rick, and Jeff (Lindsay) of Surprise, AZ; mother-in-law, Delores; brothers-in-law, Bob (Mary Jo) and John (Donna); aunt-in-law, Janet, and the rest of the Saggio Family, as well as many other relatives. He was preceded in death by his mother, Irene; father, James; siblings, Jimmy and Danny; and brother-in-law, Tom.

Doug was born on May 7, 1955 in Cleveland, OH to Irene and James Ellis. He graduated from James Ford Rhodes High School in 1973. He married Rose, the love of his life in 1975, he liked to say that when he counted his blessings he counted her “twiced”. Throughout the years, they had many addresses which Rose always made their home. Doug spent many years living in both Ohio and Arizona allowing him precious time spent with his family in both areas. He spent most of his career working in sales, but his greatest accomplishment was being the world’s greatest papa/peepaw, which he announced proudly with his prized gifts from his grandchildren. His children remember him as a patient father who encouraged them to pursue their dreams. His grandchildren remember him as a gentle man that hung on their every word and loved them to the moon and back. He loved his grandchildren unconditionally and made sure that they knew it, a gift that they will forever cherish.

Doug enjoyed singing karaoke, rock-and-roll, playing poker with his family, taking long drives with his wife, golf, trivia, fantasy football with his grandson Rylan, listening to Cleveland Indians games on the radio and watching his Browns play on Sunday. Doug was a gentle soul who needed only the simple things in life like a good cup of coffee, his favorite chair, and his homemade blanket. He was passionate about politics that he felt would make the world a better place for his children and grandchildren. Doug’s legacy is his family, he was a strong, proud, and good man. He is loved and will be missed by many!

The family would like to thank the staff at DaVita Dialysis, Barberton Hospital, and Dr. Roger Chaffee for their excellent care and support throughout his illnesses. A private memorial was held October 3rd, a celebration of Doug’s life to be held at a later date. Condolences and special memories of Doug can be shared with his family online at www.heritagecremationsociety.com