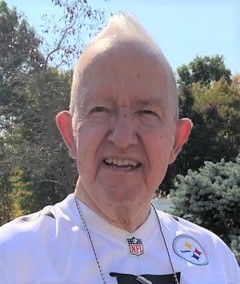 Joseph “Bud” Thomas Bees, Jr. went home to be with the Lord and his wife Patricia on November 1, 2020. He was born in Sharon, PA. September 9, 1934 to the late Gertrude (Cole) and Joseph Thomas Bees, Sr. He graduated from Hickory High School in 1952 and was hired into the drafting program at Sharon Westinghouse, where he met his beloved, Patricia Dolby. He was drafted into the Army in 1954, so he and Pat eloped to Hershey, PA. on November 5, 1954. After basic training, he was stationed in Baltimore, MD., as part of the Army Anti-Aircraft Command. He completed two years of active duty and was discharged honorably. Joseph continued to work at Sharon Westinghouse for thirty years. Upon retirement, he and Pat moved to Forest, VA, where Joseph worked for ABB. After seven years, he was transferred to St. Louis, MO and worked for Delta Star. After his second retirement, he and Patricia returned to their home in the Reynolds Development, where they had raised their three children.

Joseph was very active in Hillside Presbyterian Church, serving as a trustee for many years. The Sunshine Class was like a second family to him, and he enjoyed watching fellow class-members’ grandchildren participate in local sports. He was active in the Boy Scouts, having served as scoutmaster, Philmont Leader, and Jamboree Leader. In his later years, he volunteered at the Professional Football Hall of Fame in Canton, Ohio. In his year and a half of service, he enjoyed meeting several professional football players, as well as people from all over the world.

In addition to his parents, Joseph is preceded in death by sister, Leahbelle (Frolick); brother, Fredrick; and wife, Patricia.

Due to COVID concerns, there will be a short memorial service for Joseph and Patricia at West Side Cemetery in Sharpsville, PA. on Wednesday, November 11, 2020 at 3pm. Friends and relatives may attend wearing masks and observing social distancing guidelines. Condolences and special memories can be shared with the family online at www.heritagecremationsociety.com