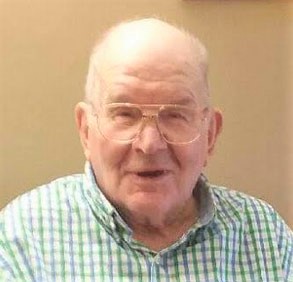 John V. “Pete” McKittrick passed away on December 24, 2020 due to COVID-19 complications. He was 95 years old. A son of the late Vern and Mamie Kurtz McKittrick, he was born August 30, 1925. He served in the US Army from 1943-1946, fighting in Europe during World War 2. Upon returning home, he married Margaret Rabb on June 22, 1946. They enjoyed 67 years of marriage until her death in 2014.  He loved working with his hands and was a master carpenter. While working as a maintenance man at Dover High School he went above and beyond, building things to make things easier for the students and staff. In 1986 he was even honored by the Council for Exceptional Children for his work supporting handicapped children. He built special bookcases, footstools, and chairs for children with physical disabilities.

After his retirement, he drove cars for Jen-Roc Auto. He picked the cars up at auction and brought them back to the lot. He also loved setting up booths at flea markets – and loved to see what bargains he could find there. He was a big fan of old-time TV westerns. He also enjoyed old-time, folk, and bluegrass music. Pete also loved dogs and adopted many over the years; all his dogs were rescues and he preferred to adopt senior animals.

In addition to his wife and parents, Pete was preceded in death by a son, Gary McKittrick; sisters, Dorothy Marsh and Doris Smith; and a great-grandson, Ian McKittrick. His brother, Ben McKittrick of Syracuse, NY passed away five days after he did, also of complications due to COVID-19.

The family would like to recognize the staff of Oak Pointe Nursing & Rehab Center in Baltic, Ohio for the excellent care Pete received & the compassion shown during his stay there.

As per Pete’s request, there will be no services scheduled. In lieu of flowers, the family requests that any memorial donations be made to Pets for Vets https://petsforvets.com/ or the Tuscarawas County Humane Society https://tuschumanesociety.com/ in honor of his love for dogs. Pete was also a staunch supporter of Disabled American Veterans and said many times that the organization helped him. Donations can be made at https://www.dav.org/.