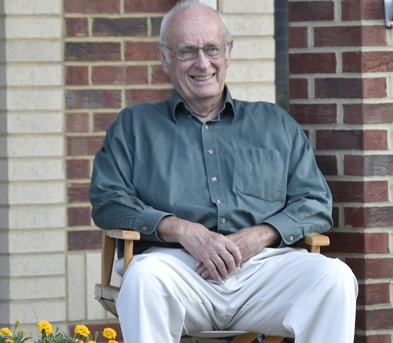 John Partridge Cold, age 85, of Elyria, OH, previously of Lakewood and Bay Village, OH, passed away peacefully from cancer on November 8, 2018. John was born in Matoon, Wisconsin, and grew up in Lakewood, Ohio.

John’s life showed the joy of love in action. He loved meeting new people and formed connections quickly. He was warm, kind, patient, optimistic and content. John was gregarious, good-humored and charming and enthusiastically participated in gatherings. He had a way of making sure everyone in his presence felt recognized and appreciated – even the “helper people” who were in the background. With a twinkle in his eye he could find humor in almost every situation. Just being there, he could make everything more fun.

John could see the good in every person (especially underdogs) which proved helpful in High School guidance counseling, organizing/refereeing/coaching kids summer athletic programs and as a Wesleyan Village Ambassador. He loved athletics and teaching kids how to play every sport. He showed up to most parties/picnics with his famous giant white canvas sack, which was stuffed with all kinds of various sporting equipment to organize an impromptu game of “whatever,” to make the event more memorable. He loved playing softball, golf, and watching college football – spreading his loyalty amongst Ohio State, Wisconsin, and Iowa much to the chagrin of his friends. He loved attending his grandchildrens’ games and art performances. He was a good dancer and had a beautiful baritone singing voice.

The youngest of two children of the late Loyd and Helen (Partridge) Cold, John was preceded in death by his brother Wallace Partridge Cold and infant sister. John attended Bowling Green State University (1955), received his Master’s in Education from Columbia University, NYC and then served in the US Army, working as a typist and photographer. He began his teaching career teaching physical education at Case Western University and Emerson Junior High, and spent 15 years as a guidance counselor at his beloved alma mater – Lakewood High School. He was a 72 year member of the Lakewood United Methodist Church.

His daughters, Michele and Tanya, were his pride and joy, as were his six grandchildren. He will be dearly missed by his longtime companion and dearest friend, Dorothy Stewart, by his daughters Michele Cold (Richard Assaf) and Tanya (Cold) Ash, grandchildren Lani, Erin, and Maya Assaf and Katie, Lauren and Ryan Ash; and many other extended family members and friends. A private ceremony will be held to celebrate John’s life at a later date.