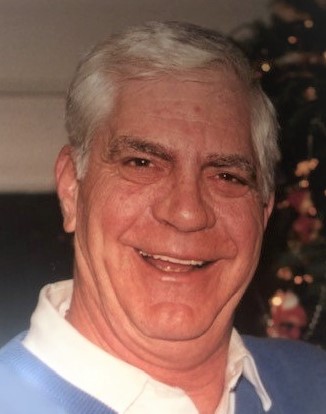 Jim “Mully” Mulhearn passed away in peace at the age of 86, on December 3, 2020. Growing up on the 18th hole at Rosemont Country Club, he developed a passion for golf. Jim was number one on the squad at Saint Vincent High school, went on to play at the University of Akron and then in the United States Army. Jim won the Ohio Open an unprecedented two years in a row.  He played against Jack Nicklaus twice, and in a foursome with Arnold Palmer while serving in the army. Jim retired from the state of Ohio after 30 years of investigating welfare fraud on the county level. As a co-founder of the Summit Senior Golf of Akron, he enjoyed many good times with his friends at Good Park golf course. Jim was also a fan of the ponies, although his wife Kathy wished he had studied the Wall Street Journal as much as he did the racing forms. Jim was known for his sense of humor, dry wit and one liners. Nobody was better, as his friends from Nick Anthe’s, Firestone 9, in the President’s Lounge Could attest to.

Jim is survived by his wife, Kathy; daughter, Melanie (Joe) Shuber; sons, Jimmy (Beth) and Michael; grandchildren, Ashley (John) Pejnovic, Eddy (Krista) Waters, Patrick James, Daniel James, Corey and Kaitlin Shuber; great-grandchildren, Ellie, Alivia, and Eddie(Hollywood). There was a special place in his heart for his niece, Peggy; nephew, Pat; his family in Green Bay, and the Bittner family. A special thank you to Jim’s caregivers, Mary Webb, Hospice of Cleveland Clinic and Dr. Deborah Plate (Dr. No) for their dedicated care of Jim.

Cremation has taken place. Memorial donations can be made in Jim’s name to the American Diabetes Association or to Pay it Forward for Pets at 1496 N. Portage Path.  Akron, Ohio 44313.