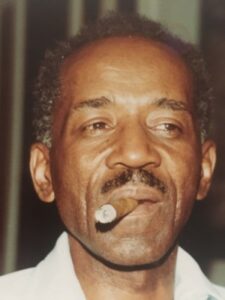 Eddie Lee Tutwiler, Sr. was born on October 25,1925 to Johnny and Annie (Jones) Tutwiler in Madison Parish, Louisiana.  He received his formal education in the Mississippi school system. He served his country as a third-class aviation machinist and cook in the U.S. Navy.  A veteran of World War II, he proudly served his country at Pearl Harbor.

After enlistment, Eddie was united in holy matrimony to the love of his life, Evelyn Bedford Tutwiler, on August 27, 1950.  To this union were born two children, Brenda Daphne Grant and Eddie Lee Tutwiler, II. He was further blessed with three more sons and a daughter:  Thomas (Olivia) Quinn of Michigan, Cal (Wanda) Stepter of Mississippi, and Corey and Eldora Love of Youngstown and Cincinnati respectively.

Anticipating the steel mill industry’s promise of greater prosperity, in 1954 Eddie and his identical twin Robert relocated their respective families from Chambers, Mississippi to Youngstown, Ohio. They successfully procured positions as crane operators and grievance committeemen at LTV, the former Youngstown Sheet and Tube Steel Mill. After nearly 25 years of diligent service, he and his twin retired together in 1983.  A man of strong work ethics and multiple talents, Eddie attended mechanic school. In his leisure time, he was an avid car mechanic, repairing and restoring endless vehicles of family, friends, and strangers alike.  He was also an all-around handyman – both inside and outside of the home – who took tremendous pleasure in helping others whenever and wherever needed. Even now, his wife Evelyn is often jestingly referred to as the “Queen” because she did very little housework. He unselfishly took it upon himself to ensure his family a pristine and orderly home.  Among many other notable accomplishments, Eddie sang with The Evening Star Quartet of Mississippi and served as a deacon of The Oak Baptist Church of Youngstown. He truly loved God, his family, gospel music, and staying active. His favorite pastime was spending quality time with his family, especially his grandchildren.  He also found great solace and companionship in Niko, his granddaughter Brandy’s Yorkie Terrier.

On April 24, 2020 at the gracious age of 94, God called Mr. Eddie Lee Tutwiler, Sr.    to eternal rest from his labor. He was preceded in death by his parents and step-mother,         Annie (Shaw) Tutwiler. Eight brothers (Clarence, Johnny, David, Louis, Euclid, Joe, Charles, and his identical twin Robert), a stepbrother, Joe Plater, and seven sisters (Emma, Inez, Louise, Mary Bell, Helena, Bertha, and Josephine) also preceded him to glory. He leaves a surviving sister, Pastor Betty (Bishop William) Taylor and sisters-in-law, Loretta Tutwiler and Willie Plater – all of Youngstown, Ohio. Evelyn, his devoted wife of almost 70 years, will forever cherish and honor his memory – as also will his children, grandchildren, and great grandchildren, along with a host of nieces, nephews, other relatives and friends.

Arrangements have been entrusted to the professional care of All Ohio Cremation & Burial Society of Cleveland, Ohio.  Family and friends, who unfortunately cannot pay respect in person at this particular time, are encouraged to offer condolences, prayers, and support via phone, text, or e-mail.  A memorial service will be held at a later date. The family of the late EDDIE LEE TUTWILER, SR. acknowledges in advance, with sincere appreciation, each and every expression of comfort, kindness, and love evidenced at this time in thoughts and deeds.