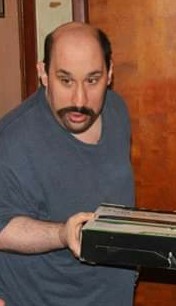 As we all know there were things Charles couldn’t do. He couldn’t work. He couldn’t cook. He had no concept of time. There were many things about Charles that were different. When people looked at him, that is what they saw – that he was different. That’s not what we saw and that’s not who he was.

When we looked at Charles, we saw the many things he could do. He could talk, a lot. He could laugh and make us laugh. He had a beautiful mind. He could remember things in a way that most people can’t. He could help around the house if asked. But most importantly he could tell you a story about his life that was full of many wonderful things despite his challenges. Even in death Charles is helping someone. His beautiful brown eyes have been donated and will help someone else see.

Charles loved older television shows, Godzilla, and Mariah Carey. He always joked that they were his beauty and the beast. He displayed those things all over his room.

He leaves behind nieces and nephews, John Payne (Samantha), Rebecca Payne (David), Jessica Dollarhyde (Samuel), and David Messenger. He had great nieces and nephews who loved to play with the toys in his room and listen to his stories, Alyssa Mash, Christina Mash, Emma Lloyd, Dakota Payne, and Tyler Payne. He also leaves behind many cousins and extended family.

Charles never liked being the center of attention, so no public service is planned.