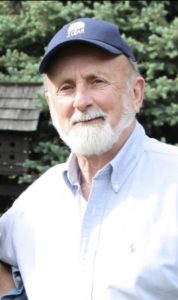 Charles “Chuck” H. Knaack of Zoar, Ohio, passed away peacefully with his wife by his side on Saturday, June 27, 2020 at the age of 79. Chuck is preceded in death by his parents, Herb and Marion Knaack, and his two sisters. Chuck leaves behind his brother Gene Knaack; Margaret (June) Knaack, college sweetheart and wife of 54 years; daughter Zoey Knaack Shorts and son-in-law Dan; and grandchildren Zackary, Ryan and Morgan.

Chuck’s life was devoted to the Lord, his family, and his community. He led with a quiet strength, strong conviction and steadfast support to those around him. The Cleveland native and graduate of West Liberty University began his teaching career at Tusky Valley Schools in 1965. He worked as an art teacher for 31 years and served as a school board member at Tuscarawas Valley and Buckeye Career Center for 21 years. Chuck’s perspective, wisdom, and counsel helped guide the school district as he understood the importance of providing a premiere public education experience for all children.

Chuck and his wife June moved to Zoar in 1970 where he became an active community leader that accomplished much during his tenure. He served as Mayor for 16 years where he was instrumental in the reorganization of the Zoar Fire Department, the restructuring of village zoning, and improved the village water system. He also served as President of the Zoar Village Council and Vice President of the Zoar Community Association. He was the sole creator and curator of the local Town Hall Museum which includes the Ohio & Eric Canal artifacts. His grant writing ability helped raise over a million dollars for several local historical building restorations in Zoar. Chuck is a life member of the Tuscarawas County Historical Society, the Zoar Community Association and he received a federal appointment to the Ohio and Eric Canal National Heritage Corridor Committee.

Chuck’s humble presence and faithfulness to his school district and community will be greatly missed. In keeping with his wish’s no calling hours or public service will be observed. Cremation will take place through the Heritage Cremation Society and a private family service will be held. People wishing to honor Chuck’s lifelong commitment to his community can make donations to the Zoar Community Association PO Box 621 Zoar, OH 44697. Condolences can be shared with the family online at https://www.heritagecremationsociety.com/.