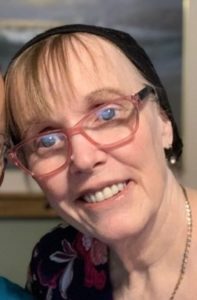 Catherine “Cathy” Moran Petrullo, age 61, of New Philadelphia, passed away Thursday evening, December 3, 2020, in Union Hospital at Dover, Ohio. Born in Santa Monica, California, on November 3, 1959 to the late Joseph and Frances Moran. On September 4, 2004, Cathy married Donato “Don” Petrullo also of New Philadelphia.  After three years of marriage, the couple moved to Nevada to take care of Cathy’s aged parents.  After the last of her parents passed away, the couple returned to New Philadelphia in 2016 and have resided here ever since.

She was a contract trainer for Brainstorm Inc. of Utah.  She was loved and respected by all of her co-workers.

Cathy’s main interest was serving her God Jehovah along with her husband. The couple have been with the New Philadelphia Congregation of Jehovah’s Witnesses since their return.  Cathy was known to always put others ahead of herself. She cared about people. Anyone who came to know her soon came to love her for that. She would always have a word of encouragement usually a scriptural principal or verse. She could usually make people feel good about themselves when they didn’t. Her work colleagues even appreciated that about her. Yes, she was a bright ray of sunshine for many but especially to her Don.

In addition to her parents, Catherine was preceded in death by her two brothers, Joseph and Robert Moran.

She is survived by her husband Don; sisters-in-law, Joanna and Lydia Petrullo; brothers-in-law, Anthony (Bonnie) Petrullo and Gino (Nancy) Petrullo.  The only surviving Moran is a nephew, Joshua Moran. Other nieces and nephews survive her.  And certainly not to be left out Mona Sayre, a longtime friend who was closer than a sister. She will be missed by all who knew her.