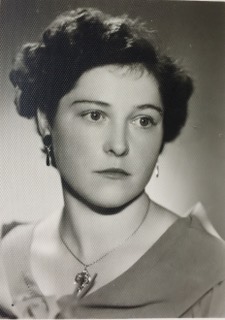 Brone peacefully passed at home after long illness on October 20, 2017, at the age of 84. She was born and raised in Lithuania. Daughter of homes builder Jonas and tailor Magdalena, sister to 5 siblings; Birute, the late Irena, the late Kestutis, the late Algis and Vytas. She had 4 children, only one is living, Daiva Jolita. She has one grandson, Emilijus.

She was married at the age of 24 to late husband Kazimieras that she survived 21 years. Her deep love for her family and friends had no limits. She was very caring and kind. Brone worked many jobs from the age of 16 starting in a tobacco factory until age of 74 including economist. She was an active and lively person. She loved dancing and making flower arrangements from her husband’s garden. She was a gentle soul as many have said. She had a very hard life but now she is resting in peace in God ‘s loving arms. Brone’s family received friends and family on October 27th at 11:30 am for funeral mass and small memorial at St Albert the Great church in North Royalton.