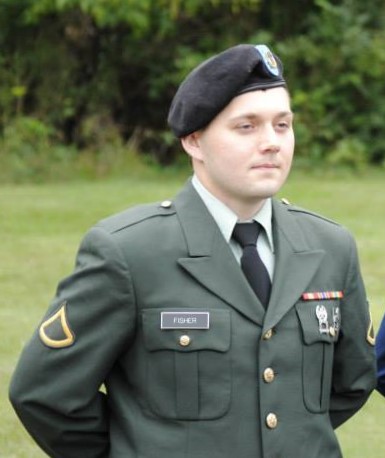 He was born December 29th 1987 in New Bedford, MA to William and Jean Fisher and was a 2006 graduate of Ravenna High School. He proudly served his country in the 838th Military Police Battalion of the Ohio Army National Guard where he performed a tour duty in Afghanistan.

Paul was kind hearted man who was well liked by anyone he ever met. He was a beloved son, grandson, brother, uncle and nephew. Those who knew him would describe him as a joker, always the clown of the group. His howling laughter will be missed by all. He had a quick wit and an incredible ability to memorize movie lines which he was always able to roll out in an instant to lighten the mood of any situation.

He enjoyed playing video games and regaling everyone with energetic performances during marathon sessions of Guitar Hero. He was such a gaming master that his mother always called him in as the savior when she was stuck on particular level and couldn’t beat the bad guys. Paul was the life of every party and never ceased to crack up the whole room with his impersonations and good-natured needling. He made his acting debut in 2012 as the legendary Wolf Friess in the You Tube Wild Survivorman short films. He loved to be in front of the camera even though it was difficult to get a photograph of him where he wasn’t making a goofy face.

He was preceded in death by his maternal grandparents James and Regina Sands of Riviera Beach, Maryland. He is survived by his parents Will and Jean Fisher of Cuyahoga Falls, sisters Mary-Catherine (Tyler) Jodon of Akron and Jocelyn (Cori) Gerstenslager of Newton Falls, Grandparents Karl and Barbara Fisher of Brunswick and Vicky Saari of Heltonville, Indiana, niece Evelynn Mascio and nephews Everett and Emmitt Jodon of Akron.

He also leaves behind three aunts’, an uncle and several cousins. Those of us who loved him dearly wish him well as he moves on to the next realm. He will be terribly missed by all.

There will be a private memorial service held at a later date, In lieu of flowers a donation in Paul’s name can be made to the Iraq and Afghanistan Veterans of America (IAVA).